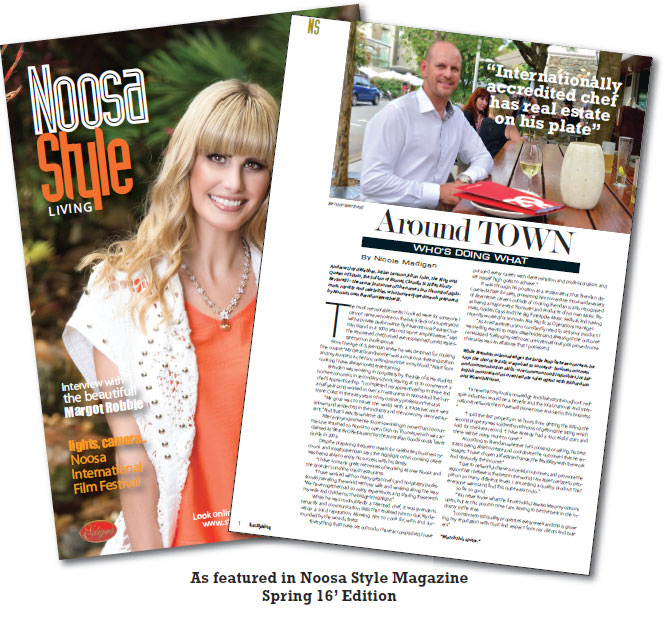 Andrew Lloyd Webber, Julian Lennon, Elton John, the King and Queen of Spain, the Sultan of Brunei, Claudia Schiffer, Kirsty Bertarelli – these are just some of the names in a throng of diplomats, royalty and celebrities, who have enjoyed meals prepared by Noosa’s own Brendan Weatherill.

The most memorable meals I cooked were for someone I cannot name, who ate on the back deck of a superyacht with a private performance by Pavarotti on a Private Croatian Island in a 1000 year old stone amphitheatre,” says the renowned chef, turned events planner, turned real estate tycoon professional.

From the age of 5, Brendan knew he was destined for cooking fine cuisine. “My Great Grandmother was a cook on a shearing station and my Auntie is a chef so cooking must be in my blood.” Apart from cooking I have always loved entertaining.

Brendan was working in hospitality by the age of 8. He studied home economics in secondary school, leaving at 15 to commence a chef’s apprenticeship. “I completed my apprenticeship in three and a half years and worked in over 37 restaurants in Noosa and the Sunshine Coast in the early years of my culinary profession,” he says. “My goal was to travel the world with a trade, become well known and respected in the industry and then own my own restaurant.” And that’s exactly what he did.

After enjoying immense success working in more than 20 countries, he returned to Noosa to open Dish on Thomas, which was acclaimed as 'Best BYO Restaurant' by the Australian Good Food & Travel Guide in 2003.

Despite preparing frequent meals for celebrities, business tycoons and royalty, Brendan says the highlight of his cooking career was being able to enjoy his success with his family. “I have so many great memories of working all over Noosa and the broader Sunshine coast restaurants. “I have worked with so many great chefs, and hospitality professionals, traveling the world with my wife and working along the way. “We have together had so many experiences and sharing these with my wife and children is the biggest highlight.”

While he was undoubtedly a talented chef, it was Brendan’s tenacity and communication skills that enabled him to quickly develop a solid reputation, allowing him to cook for, with and surrounded by the world’s finest. “Everything that I have set out to do I have accomplished. I have pursued every career with determination and professionalism and set myself high goals to achieve.”

It was through his position as a restaurateur, that Brendan discovered a flare for sales, prompting him to venture into a wide variety of alternative careers outside of cooking. Brendan is also recognised as being a major event Promoter and Producer of his own Music festivals, Golden Days and The Big Pineapple Music Festival, and having recently worked for Ironman Asia Pacific as Operations manager. “As a restauranteur you constantly need to sell your product. I was selling events to major stakeholders and always got the outcome I envisaged. “Selling myself to secure international jobs proved to me that sales was an attribute that I possessed.

While Brendan acknowledges the large leap between careers, he says the characteristics required to succeed - business acumen and communication skills - are common to all industries, including his most recent as a real estate sales agent with Richardson and Wrench Noosa.

“I knew that my local knowledge and diversity throughout multiple industries would be a benefit and the local, national and International network that I have will prove to be an asset in this business.“ “I sold the first property in 16 hours from getting the listing, the second property was sold within 48 hours of getting the listing which sold for the area record. “I have already had a successful start and there will be many more to come.”

According to Brendan, whether he’s cooking or selling, his best trait is being able to create and coordinate the outcomes that he envisages. “I have chosen a lifestyle change, the flexibility with the work and obviously the income.” “I get to network, achieve successful outcomes and promote the region that I believe is the best in the world. I am able to relate to people on so many different levels. I am selling a quality product that everyone wants and find this quite easy to do.” So far so good.

“You never know what the future holds, I always keep my options open, but at this point in time I am aiming to be the best in the industry in the area. “I continue to list quality properties every week and this is growing my reputation with trust and respect from my clients and buyers.”

Frank Milat - always upbeat and easy to deal with. As 20 year owners in Hastings St, we knew of R&W reputation as being good. This is the second property that Frank Milat has sold for us in Noosa. He has worked hard to achieve a good and fair result on each occasion and has been a pleasure to deal with both times.
Virgil Pierini
View testimonials